A patient care assistant at Davies Veterinary Specialists (Davies) has adopted charity dog Parker, who was admitted to the Hertfordshire based referral practice with leptospirosis. 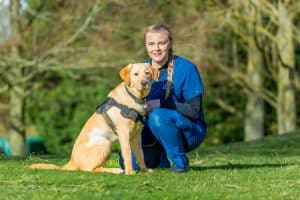 Poppy Watkin immediately fell head over heels for the poorly eight-month-old yellow Labrador Parker when he was admitted by a local animal charity to the internal medicine team at Davies Veterinary Specialists. He had acute kidney injury and progressive jaundice.

“Shortly after admission into hospital it became apparent that Parker’s kidneys had started to fail and were hardly producing any urine,” said Katherine Clarke who is a clinician in small animal medicine at Davies. “He then started to develop oedema around his face because he was accumulating fluid that his kidneys would normally be removing from his body. We were very concerned.”

Blood and urine tests, together with an abdominal ultrasound identified changes most consistent with a diagnosis of leptospirosis. This bacterial infection is common in the environment and excreted into soil and water sources by rats and other wildlife vectors. Dogs can contract the infection when the bacteria are ingested or contact the gums or broken skin. The bacteria then cause an acute kidney injury, which can lead to kidney failure, and acute liver inflammation and jaundice.

“Leptospirosis is routinely vaccinated against,” explained Katherine. “But there are multiple different sub-types of leptospirosis and the vaccine is not protective against them all. However, it is rare to see Leptospirosis in a vaccinated dog. Parker had been vaccinated but only just before he became unwell, thus it was likely he was infected before he was vaccinated but had not displayed any clinical signs.“

Parker was started immediately on intravenous antibiotics to treat the infection. A urinary catheter was placed to allow close monitoring of his urine production. He was also given a single dose of a diuretic called furosemide which helps the kidneys start producing urine again.

Parker’s kidneys then started to produce excessive quantities of urine, which can happen during the recovery phase of an acute kidney injury, and he needed high rates of intravenous fluid therapy to prevent dehydration.

“Initially Parker was miserable and didn’t want to eat or interact with the nurses,” said Katherine. “However, day by day, he made slow improvements. His appetite started to recover, he started to wag his tail and his urine production started to slow down while his kidney values started to normalise.”

Parker spent a total of two weeks in hospital before he was ready to go home, at which point patient care assistant Poppy realised he didn’t actually have a real home to go to other than back to the rescue charity.

“I couldn’t bear the thought of being parted from Parker, so my only option was to formally adopt him,” said Poppy. “He’s been living with me for just over a month now. He has settled in very well and has made a full and complete recovery from his Leptospirosis infection. I am so lucky to have him, and I think he feels the same way about me!”

To find out more about the services at Davies visit https://vetspecialists.co.uk/