A dog with a brain tumour causing loss of balance and movement has made a good recovery following surgery at Davies Veterinary Specialists.

Bella Rose a 10-year-old Bichon Frise had become unsteady on her legs, often falling over. She had also started to go to the toilet in the house which was entirely out of character, and she was quieter than usual, giving her owner serious cause for concern. She was referred promptly to the neurology service at Davies for urgent investigations.

Alex Forward, who is a Neurologist at Davies was concerned that Bella was wobbly and weak on all four of her legs and had slow responses. He performed an MRI scan which revealed a large tumour overlying the cerebellum in Bella’s brain. This is the part of the brain that is important for coordination and movement related to motor skills, especially involving the legs. It also helps to maintain her posture, balance, and equilibrium.

“We spoke to Bella’s owner about the options and after careful consideration she elected for surgery to remove the tumour,” explained Alex. “We had to remove a section of the skull to access the back of her brain to enable us to excise as much of the mass as possible. Bella was understandably a bit wobbly after surgery but recovered well and was able to go home seven days later.”

The tumour was analysed and returned as a meningioma, which is the most common type of brain tumour in dogs. These are also one of the most common brain tumours found in people and arise from cells in the meninges, which are layers that line the surface of the brain.

“Bella Rose came into my life 10 years ago and I love her so much,” said her owner Andrea Wadey. “We are very rarely apart and my nine-year-old son adores her.

“When Alex told me Bella’s diagnosis, I was heartbroken.  He explained the options we had and after thinking about it for a few days we opted for surgery. Without surgery Bella wasn’t given very long to live. It was a very scary and sad time but Alex and the team at Davies were amazing.

“From the moment I took Bella for the initial consultation everyone was considerate and kind, putting up with me blubbing all over the place! Not only did they save Bella’s life which I will always be so grateful for, but I was also kept updated daily, on how Bella was doing, with answers to all questions I had.

“They truly care for the animals in their care and understand how upsetting it is for pet parents to know their fur babies aren’t well. Bella’s recovering so well and is truly an inspiration to me, how she never gave up and came through the worse of situations. Everyday I’m in awe of Bella and her determination but without the expertise of Davies things could have been so different.

“Thank you so much to Alex who carried out the surgery and gave Bella Rose a new lease of life and to everyone who looked after Bella, we will forever be grateful.” 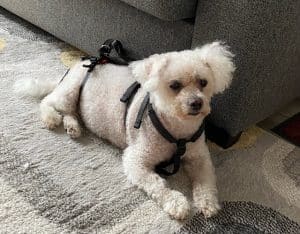 “We recently published some research looking at the long time survival of dogs following surgical removal of meningiomas,” said Alex. “Bella is much more interactive now and more excited about doing certain activities than prior to surgery. She has also started going to the toilet outside again and is otherwise well in herself. Our fingers are firmly crossed that she will continue to do well.

“We are very lucky at Davies to have specialists in anaesthesia, radiology and rehabilitation as well as exceptional nurses and patient care assistants, all of which are integral to the successful treatment of a patient such as Bella.”

To find out more about Davies visit their website .