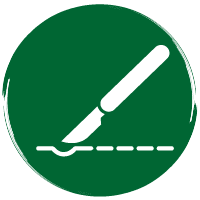 The hallmark of the disease is a chronic inflammation and ulceration of the perianal tissues, with progressive development of multiple sinus tracts about the circumference of the anus.

The disease is most commonly (82%) seen in the middle-aged and older German shepherd breed (and crosses); Irish setters, black Labradors and other large breeds have also been affected.

Current evidence suggests that immunological factors are involved in the primary aetiology, although no simple defect is likely. The disease appears to be modulated through cell-mediate immunity (T-cell involvement).

What is the treatment for perianal fistula?

Current treatment recommendations use potent immunosuppressive drugs in the treatment of perianal fistula. Ciclosporin shows the most promise. In the initial study with this drug, marked improvement in lesion size was seen in all cases, and complete remission was reported to occur in the majority of dogs during the 12-week treatment period.

Currently, ciclosporin remains the drug of choice and most dogs will respond quickly and effectively. However, the drug may be poorly absorbed from the gut in some animals, and dose requirements need to be carefully tailored to the individual. If no response to treatment is observed within four weeks of starting this drug, your vet may wish to review matters.

Ciclosporin is very expensive. Your vet may combine treatment with another drug to improve its effectiveness. This combination therapy may enable lower doses of ciclosporin to be used, reducing the expense of treatment.

How successful is the treatment?

Other immunosuppressive drugs do not appear to be as affective as ciclosporin, but may be effective in minimally affected animals.

Are there any side-effects with this medication?

Ciclosporin is usually well tolerated by dogs. Your vet will usually ensure that kidney and liver function are normal, as these two organs may be affected by the drug. A common side-effect is excessive hair-growth, which may lead to clumps of hair being left around the house.

Are there any other considerations with this disease?

An association between perianal fistulae and bowel disease has been suggested by some authors. An association implies that the two conditions may be seen in the same patient frequently, but does not imply that they are causally linked. Appropriate medical management of the inflammatory bowel disease using a combination of novel protein diets and immunosuppressive doses of corticosteroids, resulted in clinical remission rates comparable to surgical management in one paper (66.3%). In some animals, treatment resulted in the resolution of the clinical signs of disease (i.e. tenesmus, dyschezia etc) even though the perianal fistula did not completely resolve. Greatest success (83.3%) was recorded in animals that were only mildly affected, and the authors considered that perianal fistulae might reach a point where they become chronic, self-perpetuating, and only responsive to surgical intervention.

Concurrent bowel disease may be important simply because it interferes with the absorption of ciclosporin. By treating occult bowel disease, improved treatment success may be seen.

Will my pet get better?

While the precise cause of perianal fistulae remains uncertain, consistently successful management strategies will also be elusive. However, with careful consideration of all the components of this disease, many dogs can have their disease well controlled. Identification and elimination of possible complicating factors may improve success rates.

It is important to remember that responses to different treatment regimes appear to be very individual. In addition, the basis for success is regarded as resolution of clinical signs, particularly pain and straining when defecating. Occasionally, ‘success’ may be considered even if small, non-progressive fistulous tracts remain in some patients.

If you have any further questions about perineal fistulae you should speak to your veterinary surgeon who will be able to discuss this condition with you more fully.