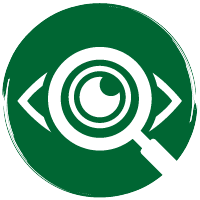 This factsheet contains information on the causes, symptoms and available treatment for non-healing or indolent corneal ulcers in dogs.

What is the cornea?

The cornea is the transparent window at the front of the eye that allows light to enter. The surface of the cornea is covered by a thin layer called the epithelium, which protects the cornea and keeps it waterproof. To allow good vision the cornea needs to remain transparent, and free of vessels. 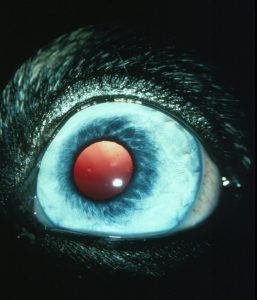 What is a corneal ulcer?

An ulcer develops when part of the surface layer of cells (known as the corneal epithelium) becomes damaged, exposing the underlying tissue (the corneal stroma). The eye becomes painful and cloudy, and the white of the eye may become reddened and inflamed. Most corneal ulcers will heal rapidly within a few days, as the epithelium regenerates from the edges of the ulcer and spreads across the defect. However, in some dogs this healing process does not occur and they go on to develop a SCCED. This type of corneal ulcer is shallow and non-infected but fails to heal.

SCCED ulcers are usually quite uncomfortable, leading to squinting of the eye and a watery discharge. If left untreated they can persist for many months causing continuous irritation. In some cases the eye may develop a granulation tissue reaction, in which the surface of the eye becomes reddened and inflamed- this can lead to reduced vision. 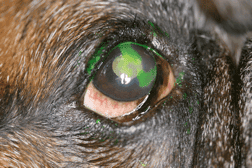 A SCCED ulcer in a Boxer – the green dye highlights the area of ulceration. 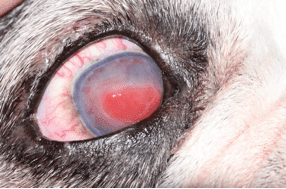 In this dog, a SCCED ulcer left untreated has developed a red and inflamed granulation tissue reaction which is affecting vision.

Why does a SCCED ulcer not heal?

The epithelium at the edge of a SCCED ulcer is loose and unable to ‘stick down’ to heal the defect. For the ulcer to heal, this non-adherent epithelium needs to be removed and the underlying layer altered so that normal healthy epithelium can spread across and stick down.

How can we treat SCCED ulcers?

The aims of treatment are to remove the loose epithelium and to encourage newly formed epithelium to anchor to the underlying cornea. Occasionally these Corneal treatments can be performed in the conscious animal using local anaesthetic eye drops but often it is necessary to sedate the patient.

Initially, after applying local anaesthetic drops, we debride the loose epithelium from the edge of the ulcer using a cotton bud (see photo below). Following this, options include: 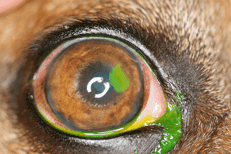 SCCED ulcer in a Staffordshire Bull Terrier dog before debridement. 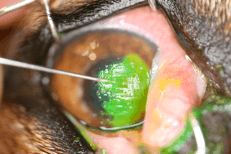 Grid keratotomy is then performed on the SCCED. 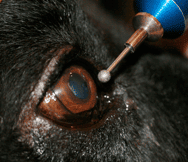 What happens after the procedure?

Following treatment, we give a course of pain-relieving tablets and antibiotic eye drops until the ulcer heals. The eye may be a little less comfortable and cloudy, but this should settle over a few days.

Rarely the eye may become very inflamed and reddened.

If you are concerned in any way (especially if a discharge develops, or if the eye appears very painful) then please give us a call for advice or to arrange a check-up examination.

Our Ophthalmology team love nothing more than seeing the joy for both pet and owner when a small animal’s vision is repaired or restored.

Information from our Ophthalmology team on the different types of corneal grafts available to treat deep corneal ulcers.

Our Ophthalmology team used a new surgical procedure to save the eye of a Chihuahua referred for urgent treatment.