Ted was presented to Davies Veterinary Specialists back in September 2017 as an emergency due to progressive paresis (weakness) in his hind limbs. MRI scan revealed a T13/L1 disc extrusion causing moderate spinal cord compression and he underwent spinal surgery called a hemilaminectomy. When our physiotherapy team at Davies Therapy and Fitness Centre first met Ted following his surgery he was non-ambulatory, but by the time of discharge he was able to walk with sling support. 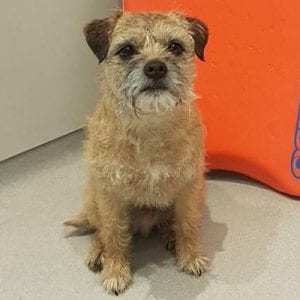 Ted has been having rehabilitative hydrotherapy with us ever since, starting on a weekly basis. Ted’s sessions incorporated guided limb placement, walking backwards and surfing in order to restore his gait patterning and strength and balance. After 10 sessions, we are pleased to be able to discharge Ted from treatment after achieving a full return to function and recently enjoying a seaside holiday to the fullest! Well done Ted and we hope you enjoy many future walks by the seaside!