Holly’s owners were distraught when their Labrador puppy showed intermittent signs of lameness.

At just six months old, despite rest and restricted exercise, she had begun to develop a paddling forelimb gait. Holly’s vet at Avon Lodge Veterinary Group in Salisbury took radiographs of the puppy’s elbows as a precaution when she came in to be neutered but no abnormalities were spotted. It is sometimes possible for puppies to have lameness caused by a minor problem that will resolve spontaneously but it is more common for lameness to be caused by a developmental problem that can have serious long-term consequences. 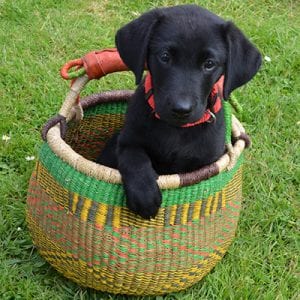 The irregular gait persisted so Holly was referred to the Orthopaedics team at Davies Veterinary Specialists to get to the bottom of the problem.

On examination, subtle bilateral elbow discomfort was identified but there was no palpable elbow effusion. High quality radiographs of Holly’s elbows and shoulders showed no detectable abnormalities. A CT scan showed bilateral elbow dysplasia and unfortunately it involved OCD, which carries a guarded prognosis. As the prognosis was poor without intervention, we conducted an elbow arthroscopy to make a more detailed assessment.

Arthroscopy revealed diffuse cartilage erosion in Holly’s right elbow joint, with grooves along the entire medial compartment of the elbow. There were similar but less severe changes on the left. In short, Holly was suffering from the severest form of elbow dysplasia. 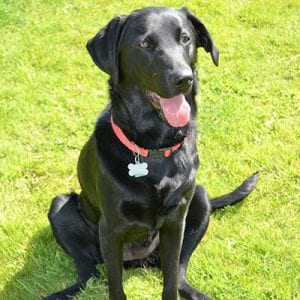 During surgery a bilateral bi-oblique proximal ulnar osteotomy (PUO) was carried out, which involves cutting the ulna at a specific angle. The intention was to eliminate conflict between the humeral and ulnar articular surfaces. The surgery went well. Our Orthopaedic Specialist cautioned that although the surgery was very likely to improve Holly’s problem, the prognosis for a return to being clinically normal was guarded particularly on the right. Although PUO has a good reputation for immature dogs with medial compartmental disease, neither elbow could be rendered normal. Ten weeks later Holly was showing no signs of lameness, no elbow pain or swelling and the PUO sites were stable with no obvious swelling. On her six months recheck Holly’s owners reported that she was able to exercise vigorously and play without lameness. Her long- term prognosis now looks good.

Holly’s delighted owners said: “Thanks to the wonderful work by the Orthopaedic Specialist at Davies we now have a happy, healthy, pain free Labrador who leads a completely normal life. Holly is the most wonderful dog and we cannot thank Davies enough for the care, kindness and expertise they provided both Holly and to our family”.