Teddy, a 10-month-old miniature Australian labradoodle puppy with a penchant for scavenging had been vomiting and lethargic for four days. His local practice suspected foreign material was present which prompted emergency referral to Linnaeus-owned Davies Veterinary Specialists.

Teddy was admitted by the on-call Soft Tissue Surgeon. The radiologist identified a foreign body in the small intestine. The anaesthesists were able to simultaneously stabilise Teddy and prepare him for surgery. The surgical team then performed an exploratory laparotomy and enterotomy to retrieve the foreign body.

“The longer a foreign body remains lodged in the intestines, the greater the risk of fatal consequences such as septic peritonitis. We were able to act fast and so the intestine at the site of the obstruction was not devitalised.” explained said Rufus Hammerton, Resident in Surgery at Davies.

“As a multi-disciplinary practice, we were able to manage the case very quickly and efficiently. We always have members of each team on call, ready to treat cases at any time. Smooth teamwork between the departments meant we could effectively treat Teddy and avoid potentially fatal consequences.”

Teddy recovered well and was discharged two days later. He is now back to being a normal, happy bouncy labradoodle puppy.

“I knew Teddy was deteriorating by the hour and had voiced my fears that if we didn’t get specialist help he wasn’t going to make it,” said Teddy’s owner Gemma Geddes. “I’ll be forever grateful I pushed for Davies’s help. Within five minutes of arriving, I knew he was in competent and safe hands when they confirmed they’d already established where the blockage was and were preparing him for surgery.

“Davies were professional, caring, communicative and allowed my husband and I to ask a multitude of questions without ever feeling we were taking up their time. Most importantly I never felt like Teddy was just a ‘patient’ to them, they understood how important he was to us.” 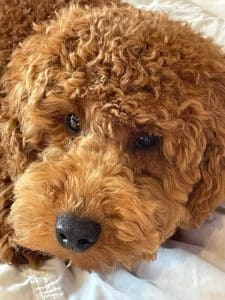 To find out more about the services at Davies visit https://vetspecialists.co.uk/