A 6 year old Domestic Short Hair was brought in as an emergency with severe Neurological signs (head tilt/turn to the left, severe Ataxia and falling over, focal seizures (Tetraparesis). 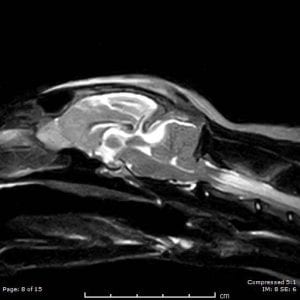 Two weeks prior to that an abscess on the left side of the dorsum of the head was drained and treated with antibiotics and NSAIDs by the primary veterinarian and a bite wound was suspected. The abscess improved but 24 hours prior to referral the cat showed rapidly progressive forebrain and brainstem signs while still being on antibiotics. 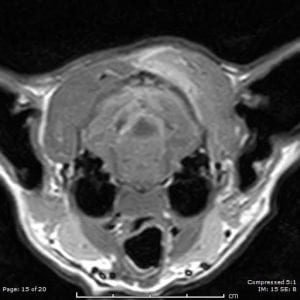 An MRI scan of the brain showed accumulation of T2W hyperintense and contrast enhancing material caudal to the Tentorium cerebelli causing marked mass effect on the cerebellum, foramen magnum herniation and secondary syringomyelia. There was an increased size of the subarachnoid space in the majority of the cerebrum and cerebellum with meningeal contrast enhancement. The appearance of the left temporal muscle was abnormal with marked swelling and heterogeneous hyperintensity on T2W images and contrast enhancement. An intracranial empyema secondary to bite wound was suspected. 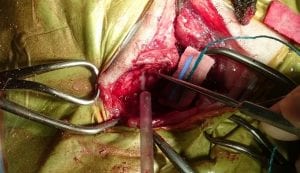 A left-sided combined rostro-tentorial and caudo-tentorial craniectomy with transverse sinus occlusion was performed to drain the empyema which was located intra-durally between the tentorium cerebelli and the rostral part of the cerebellum. Sample taken for culture/sensitivity later came back as negative. The cat made very quick recovery following surgery and regained normal neurological status after 36 hours. He initially received 2 days intravenous cefuroxime and metronidazole followed by 3 weeks oral cefalexin and metronidazole.