Bear was presented to our Ophthalmology team with cataracts in both eyes. 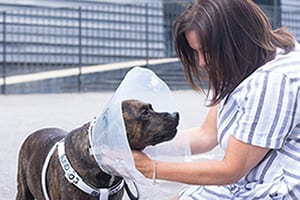 He was completely blind in his right eye, and severely compromised in his left. Unlike in humans, where most cataracts are due to old age, in dogs they are most likely to be hereditary so can occur at any age; they also arise due to diabetes.

The decision to operate was a difficult one for the owner as Bear had been visually compromised for a long time, and cataract surgery in dogs requires a lot of aftercare.

We performed an ultrasound examination before surgery to check the back of Bear’s eyes for any problems which might make the surgery difficult or even unwise to perform. These problems include retinal detachments, splits in the back of the lens, or abnormal persistent blood vessels. Fortunately Bear’s eyes were clear of any of these problems, and with this knowledge the owner decided to go ahead with the surgery.

Bear’s cataracts were removed by phacoemulsification

Under general anaesthetic the cataracts in both eyes were removed by a process called phacoemulsification, which is a form of high frequency ultrasound. When all the cataract material was removed, artificial lenses were placed into the lens capsules inside the eyes to give Bear better focussing ability.

Then followed a period of intensive aftercare.

Firstly 4 days in our hospital and then at home with his owner. There were a lot of eye drops to give (antibiotics, anti-inflammatories, pressure-lowering drops and lubricants) and Bear’s owner was fortunate enough to be able to work from home during the first few weeks after surgery, so she could dedicate the necessary time to him.

“Phacoemulsification cataract surgery has a high success rate in dogs and cats but requires careful aftercare by the owner and regular post-operative check-ups. Thankfully, Bear’s owner was able to dedicate the necessary time for his aftercare and eye drops, and she did a great job!” 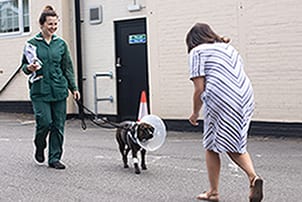 Bear’s surgery was a great success

It was notable before the surgery that although Bear was very friendly, he was easily panicked  and very clingy to his owner. On his first re-examination after the operation there was already a marked difference in his behaviour; he was much calmer and more relaxed about being examined. Since then his confidence has gone from strength to strength, and his owner has been able to get rid of his ‘blind dog ‘ harness!

Find out more about our Veterinary Ophthalmology service:

Click here to learn more about the conditions and treatments referred to our Ophthalmology team.

Click here to read our Fact Sheet for pet owners with information on Cataract surgery.