A young cat with a diaphragmatic hernia caused by a suspected road traffic accident has made a complete recovery following emergency surgery at Davies Veterinary Specialists (Davies) in Hertfordshire.

Tiger checked into his home much later than normal on Boxing Day and his owner became concerned when she noticed he seemed weak and unable to jump. Apart from a slight scratch on a back paw and some discomfort when he was picked up, Tiger didn’t have any other obvious signs, but he was clearly not well. Tiger’s owner took him to their local vets who performed a radiograph and detected a tear in his diaphragm. The severity of the Injury prompted emergency referral to Linnaeus-owned Davies Veterinary Specialists.

Tiger was quickly admitted to Davies, where he was stabilised by specialist anaesthetists prior to surgery.

“We found a 5cm rupture in Tiger’s diaphragm,” said Rufus Hammerton, Resident in Surgery at Davies. “We retrieved sections of the liver and spleen from the chest and repaired the diaphragm.”

Tiger recovered very well from the surgery and was carefully monitored for 24 hours to make sure there were no respiratory concerns. He was discharged the following day and has made a full recovery, much to his owner’s delight.

“Davies were excellent with the care they provided for him,” said Tiger’s owner Lindy Windmill.

“We had a long drive from our vet in Surrey to Davies and I was so impressed with the speed with which Davies were able to fit us in for an appointment.  The veterinary surgeon we saw already had all the information and still gave Tiger a thorough check up and explained the required procedure and risks to me.

“It was very reassuring receiving calls from him before and immediately after the operation letting me know how Tiger was doing, as well as later in the day to let me know when discharge could be expected and what we would need at home to care for him. When I collected Tiger, the nurse told me how he had been since his operation and gave me the details regarding his medication.

“My family and I, especially his sister, Lynx, are very grateful to the surgeon and all the staff at Davies for their wonderful care which has given us back our warm, cuddly and purring Tiger.” 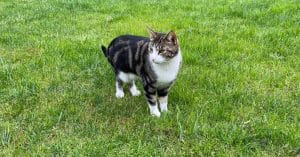 To find out more about Davies visit our website .