Warning: count(): Parameter must be an array or an object that implements Countable in /home/vetspecialistsco/public_html/wp-content/themes/theme/single.php on line 63 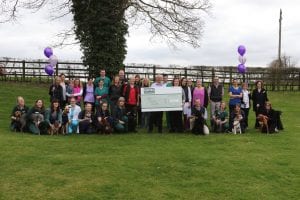 Each year, Davies Veterinary Specialists democratically chooses a charity of the year and team members collect as much cash as they can for their chosen charity through creative fund raising projects. Target Ovarian Cancer was picked for 2016 because several team members have had close ties with the charity over recent years. Radiographer Sue Whitfield was diagnosed with Stage 3 ovarian cancer in 2013. Her clinical nurse specialist at Mount Vernon hospital was a great support and initially gave her some leaflets and resources to read from Target Ovarian Cancer.

“The Target Ovarian Cancer website was a valuable source of information for me especially as I came to terms with my diagnosis and prognosis. After I had finished chemotherapy some of us from DVS did the sponsored 10k walk at Hatfield House for Target Ovarian Cancer. I was so pleased when they were chosen as DVS’s charity of the year for 2016 and even more so to hear that DVS would match the total money raised by the DVS team during the year.  The amount of support I’ve received from my colleagues over the past three years had been incredible and it’s great to be able to raise so much money for such a brilliant charity.”

Fundraising events have included a summer strawberries and cream tea, a Halloween soup kitchen, toy sales, a virtual Christmas Card initiative – whereby colleagues donate money and sign a joint Christmas card – the great DVS Bake Off (a very popular event over the period of a week with daily winners), a Loom Bands sale and tapas and cheese events. Louise Clark RCVS & European Veterinary Specialist in Anaesthesia at DVS also arranged a collection at the East of England Veterinary Anaesthesia Regional Meeting and team members, friends and family joined together for the Target Ovarian Cancer walk. In addition Davies Veterinary Nurse, Nichole Neate is running 100 miles throughout March and blogging about her continued support of the TOC charity. 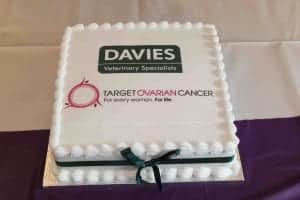 “We are incredibly lucky to have such an amazing team of motivated professionals here at DVS. They have put as much heart into supporting our charity of the year as they do into helping our patients every day. We are proud to match the amount they have raised to help the excellent cause of Target Ovarian Cancer.”

To find out more about Target Ovarian Cancer, visit targetovariancancer.org.uk