CHUMS a Local Mental Health and Emotional Wellbeing Service for Children and Young People, based in Silsoe Bedfordshire has received a generous boost to its funds in the form of a cheque for £1500 from Davies Veterinary Specialist (Davies). 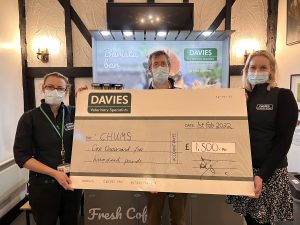 Davies, the Linnaeus owned small animal referral practice based near Hitchin in Hertfordshire, raised the money for CHUMS having nominated them as their charity of the year for 2021.

Tireless team members at Davies cooked up some inventive ways to raise some cash for CHUMS, a favourite of which was a climate conscious colleague cookbook: members of the team came up with climate conscious recipes including organic, locally sourced and seasonal foods and vegetarian and vegan dishes.  The recipes were compiled into a pdf and the team were asked to make a donation to CHUMS for a copy of the ‘recipe book’.

Continuing with the green theme, the Davies terracycle scheme in the practice staff room raised additional revenue for CHUMS, with the recyclable detritus sent to teracycle in return for a donation.

Three raffles throughout the year proved popular, giving team members a chance to win some super prizes including a day’s annual leave, a pamper hamper and a takeway! Meanwhile a florally creative member of the team’s jam jar flowers were in high demand, in exchange for a donation.

We are delighted that, despite the pandemic, we managed to raise £1,500,” said Tim Richardson, Managing Director of Davies. “CHUMS is an admirable local charity, providing important practical and emotional support across so many aspects of life. We are proud to have been able to help them to fund their vital work in this way.”

Emma Stewart, Corporate and Community Fundraising Manager at CHUMS said: “We were thrilled to be so generously supported by Davies during such a challenging period when we were being inundated with extra mental health referrals but our corporate, community and events fundraising programme was being decimated by the pandemic.  Congratulations on coming up with such original climate friendly initiatives – we will definitely be promoting more of these to supporters going forward. We wish you the best of luck with your next Charity of the Year – StreetVet.”

In addition to their CHUMS fundraising, Davies made donations to several OTHER charities close to the hearts of members of the team, including Alzheimer’s Society, Little Princess Trust, Child Bereavement UK and a local fundraiser for a 12-year-old boy with an aggressive brain tumour: Gorgeous George One Big Fight.

Davies’ Charity of the Year for 2022 is StreetVet who deliver free care to the homeless and their pets on the streets in multiple locations around the UK.  They provide free essential veterinary care and services to the pets of people experiencing homelessness.