We first met Twiggy in September 2016 after being referred to Davies Veterinary Specialists following a road traffic accident. Twiggy had a traumatic fracture of the right hip joint, which was surgically reconstructed using a plate and screws by one of our specialist orthopedics. However, due to the nature of the fracture, it was advised that Twiggy may need to undergo a total hip replacement in the future. 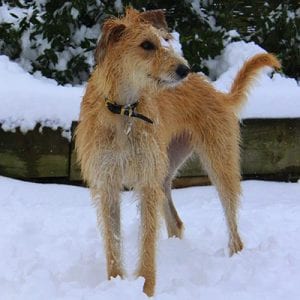 Twiggy’s 6 week check-up radiographs revealed an implant failure, malunion of the fracture, muscle wastage and discomfort in the hip joint. A Total hip replacement was now recommended but could not be performed for at least another 3 months until the fracture was fully healed. Twiggy then began underwater treadmill therapy here and weekly input from a local physiotherapist to improve limb function and muscle mass prior to the hip replacement. 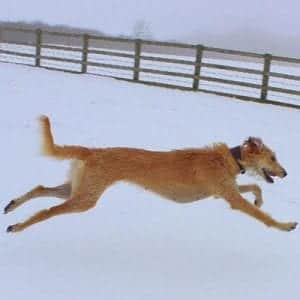 Twiggy underwent a total hip replacement at the end of April 2017 and then began intensive hydrotherapy treatment in our underwater treadmill 3 weeks later, alongside a personalised home exercise plan. 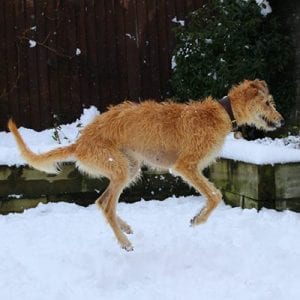 Initially, Twiggy was mostly non-weight bearing with poor foot placement due to sciatic weakness in the limb. Recently limb use and muscle bulk have improved significantly, by the end of September Twiggy was not lame and had full control over her foot positioning. It has taken a lot of hard work and dedication to get Twiggy to the active, bouncy girl she is now. A whopping 25 hydrotherapy sessions later, we were able to discharge Twiggy at the end of 2017.