Rufus, an 11-year old Norfolk Terrier, presented to the Veterinary Neurology and Neurosurgery Service at Davies Veterinary Specialists as an emergency. 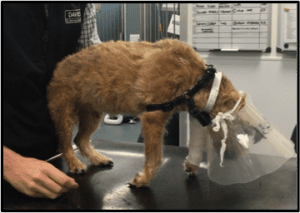 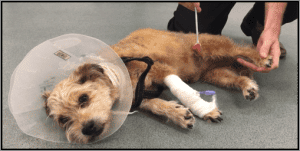 His owners reported a chronic, progressive tetraparesis and ataxia that had been progressing over the preceding months to the point where he became unable to ambulate. On his neurological exam, Rufus had a right lateralising non-ambulatory tetraparesis with a low head carriage and cervical pain on palpation. His spinal reflexes were intact and his cranial nerves were within normal limits. Based on this, his neuroanatomical localisation was a C1-C5 myelopathy.

Further advanced imaging in the form of an MRI scan was performed. This revealed a focal, round, well-demarcated, extradural mass on the right side of the cranial cervical spinal cord at the level of the atlanto-occipital junction. The mass was causing marked spinal cord compression, exhibited strong contrast enhancement and was causing secondary intramedullary cervical spinal cord changes. The MRI was very suggestive of a meningioma.

After discussion, surgical intervention in the form of a dorsal laminectomy of C1(atlas) was performed. A large red, focal, well-demarcated mass was gently excised away from the spinal cord and sent off for histopathology. The results confirmed it was a grade II, transitional meningioma. Meningioma’s are the most common primary spinal cord tumour in dogs and are most often found affecting the cervical spinal cord. 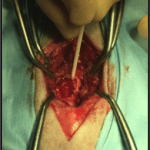 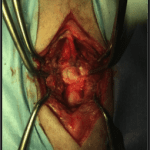 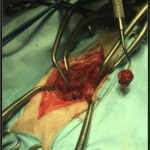 The mean survival time of dogs undergoing surgical excision of intraspinal meningiomas is 19 months. This can potentially be extended if radiation therapy is performed post-operatively.

Rufus recovered well from surgery and improved neurologically to being ambulatory with assistance at just four days post-operatively. He will continue to receive physiotherapy and hydrotherapy through the therapy and fitness centre here at Davies. 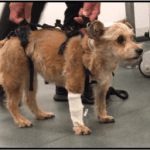 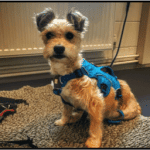 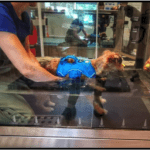 Click here to watch our video about Rufus’ treatment at Davies Veterinary Specialists.

To find out more:

Click here to find out more about the Veterinary Neurology and Neurosurgery Service at Davies Veterinary Specialists.