Handsome cross breed Olly survived tetanus, thanks to a fast diagnosis and emergency treatment at Davies. His owners have shared his story to raise awareness of this deadly disease and to help prevent other dogs from suffering.

Olly, a young black cross breed gave his owners a terrible scare when he was diagnosed with tetanus, a rare but potentially deadly disease caused by a bug found in soil.

Olly’s local vets Scotts were quick to spot the signs and rushed Olly by emergency ambulance to Pete Smith, Neurologist at Davies.

“Olly was showing the classical signs of tetanus, with stiffness in all four legs and an odd facial expression, with a forced grin, wrinkling of his forehead and pricked up ears.”

“Tetanus isn’t common and can be difficult to spot in the early stages, though once you’ve seen it a couple of times it is very recognisable. When we see an affected patient, we know it will be a long road to recovery with possible complications.”

Olly was admitted to the intensive care unit at Davies. The hallmark of tetanus is muscle spasm – this and the associated pain need urgent medical control. Olly was given medication to relax his muscles and painkillers to make him more comfortable. He needed a combination of different drugs to control the spasm. Pete also had to prevent further toxin production by eliminating the infection and use antitoxin to neutralise the toxin that had already been absorbed. 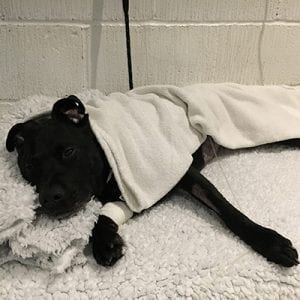 Nursing is a crucial component of tetanus management. In Olly’s case he was under the expert care of Nurse Supervisor Charlene Oosthuizen and her team. Meticulous nursing reduces the occurrence of uncontrolled muscle spasm and of seizures, avoids pressure sores, encourages normal nutrition and – crucially – helps to identify complications before they become a problem.

Olly spent two weeks in intensive care at Davies. His owners were over the moon when they were allowed to take him home. Babs Ward said: “We are just very lucky Olly came to Davies – he needed a lot of vet care and a huge amount of input from the nurses. We knew that he wasn’t right but we just wouldn’t have known he had tetanus.”

Keith Ward said: “We can’t thank the team at Davies enough we are so pleased to have Olly back. Unsurprisingly we feel very protective of him following his experience.” 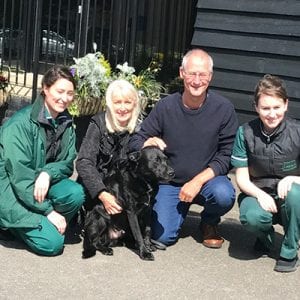