Chubby is referred with megaoesophagus

The Internal Medicine and Veterinary Nursing teams at Davies Veterinary Specialists have taught French Bulldog Chubby to eat in an upright position to help manage his dilated and dysfunctional oesophagus. Chubby was a particularly unusual patient having been diagnosed with myasthenia gravis but uncommonly showing no signs of muscle weakness other than megaoesophagus. 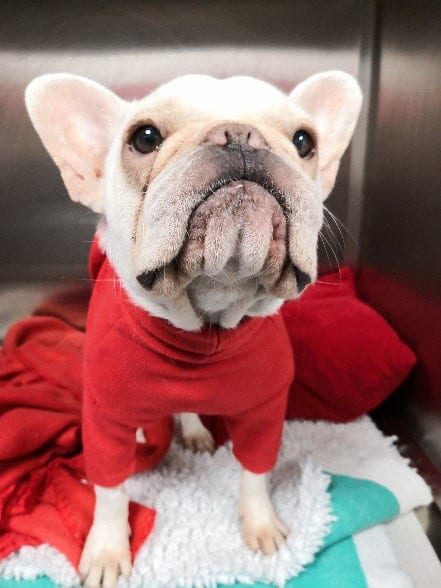 Chubby was referred to Davies Internal Medic Eva Buresova with severe regurgitation, weight loss and lethargy. The regurgitation was managed medically but Chubby needed further treatment for aspiration pneumonia when stomach contents entered his lungs – a common complication of regurgitation.

Following extensive investigations, Chubby was diagnosed with the autoimmune neuromuscular disease myasthenia gravis. This was the cause of the megaoesophagus (dilation and dysfunction of the oesophagus).

“Chubby’s presentation was unusual as only his oesophagus was affected which is called focal myasthenia gravis. While similar cases have been described, it is more common to also see activity-induced weakness and a short choppy gait, none of which Chubby had.”

Chubby was started on a medication to treat the myasthenia gravis and continued with medical management for the regurgitation. Part of this treatment is for soft food to be fed in balls and for the patient to eat in an upright position.

Some patients use a ‘Bailey’s chair’ for feeding,” explains Eva, “but Chubby was such an amenable patient our nurses were able to teach him to eat whilst on some steps. 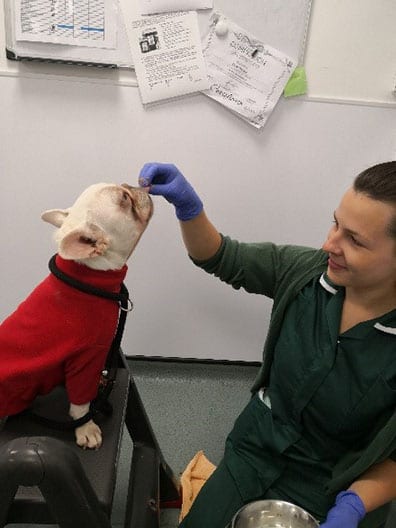 Chubby has now been discharged and his owner has continued with his feeding regime and medications. He is doing very well, regurgitates only occasionally and is starting to gain some weight.

With his easy-going personality Chubby became a firm favourite with the team at Davies during his lengthy stay. One of his nurses, Jazmin White, said: “He has been through a lot and made such a big improvement, he has also been such a superstar throughout all of his treatment”.

Click here to read our Fact sheet on myasthenia gravis.

Click here to find out more about our Internal Medicine Service.