Miniature Dachshund Lola had episodes of strange behaviour. To her owners’ alarm she periodically appeared blind, seemed unaware of her environment and was visibly distressed. The incidents would last for two or three days but between them Lola drank excessively, was frequently sick, lacked energy and sometimes chewed and swallowed her toys. 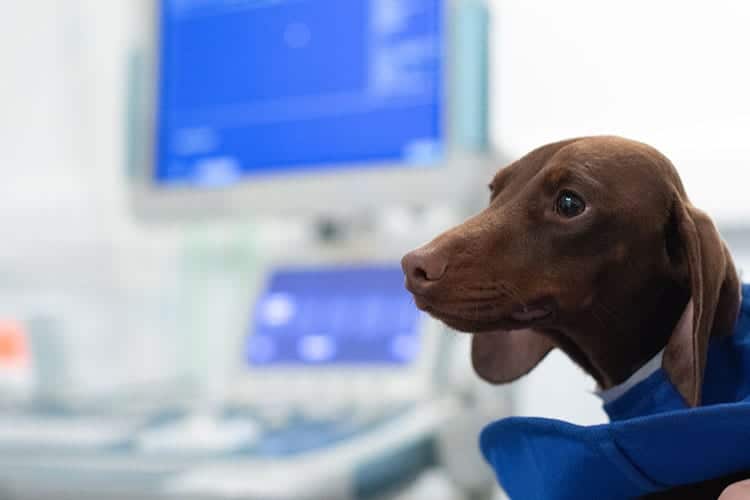 An abdominal ultrasound confirmed an extrahepatic portosystemic shunt, suspected to be a portoazygous shunt. The ultrasound also showed a gastric foreign body. Endoscopy revealed that Lola had large sections of rubber ball in her stomach and these were removed via endoscopic retrieval. Sometimes dogs with PSS can develop a desire to scavenge which is probably why Lola was constantly eating her toys! 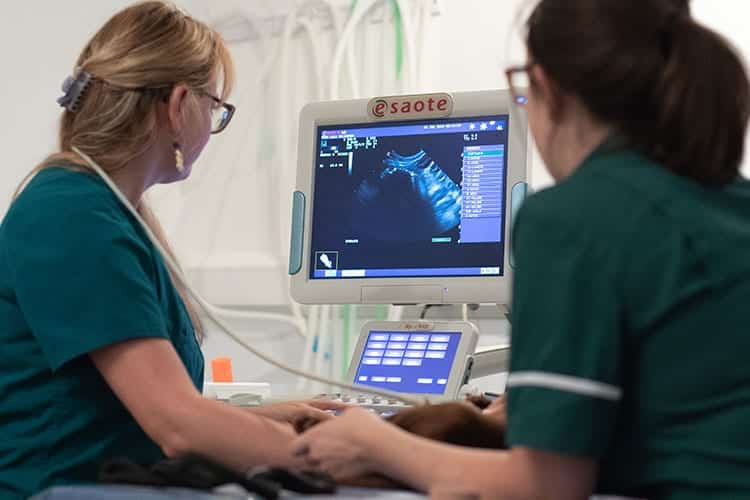 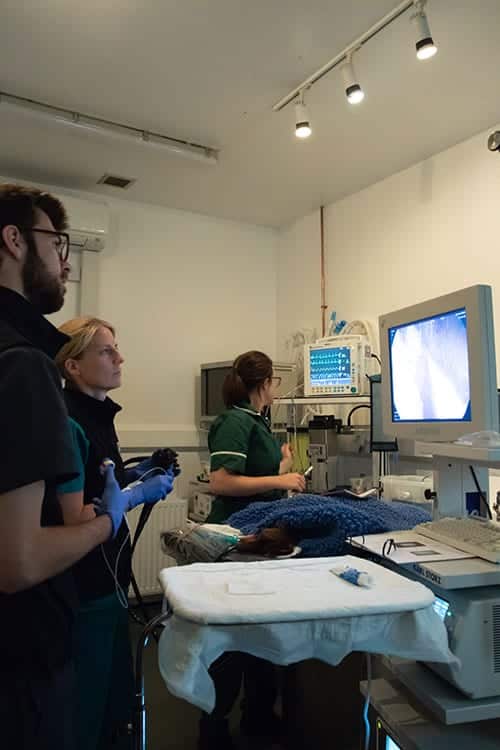 Lola recovered well and was able to go home the same day. She was given antibiotics, lactulose and a special diet to manage her high ammonia prior to surgical intervention for her shunt. She was also given omeprazole in case there were any gastric erosions post foreign body and also, some dogs with shunts have an increased risk of GI bleeding.

After a few weeks, Lola returned to see our soft tissue specialist Carolyn Burton for surgery on her shunt.

Portosystemic shunts are abnormal single or multiple blood vessels which directly join the blood supply from the intestines to the main circulation. In a normal animal, blood draining from the intestines passes immediately through the liver for nutrients to be processed and toxic substances to be removed prior to the blood entering the main circulation. In an animal with a PSS, a significant volume of blood bypasses the liver and directly enters into the blood flowing back to the heart where it is pumped around the body.

Different types of PSS exist. Shunts in young animals are generally congenital, i.e. they are present at birth due to abnormal development of the foetus. These shunts are usually a single blood vessel. Acquired shunts form as a result of another problem. This may be either primary liver disease, or a disease involving the normal blood vessels into the liver. This type of PSS usually causes multiple abnormal vessels to be formed. Congenital PSS are often suitable for surgical correction, whereas acquired PSS are not. Many different congenital PSS exist. They are broadly categorised into those which are accessible outside the liver – extrahepatic, and those which pass through the substance of the liver – intrahepatic. In general terms many small breeds of dog have extrahepatic shunts, whereas large dog breeds have intrahepatic shunts.

Lola had an extrahepatic portosystemic shunt. During surgery, Carolyn had to find the shunt and partially close this down with a cellophane band to allow all the blood draining from the gut to be routed correctly through the liver substance for processing. Closing the shunt completely during surgery is only possible in approximately 15% of animals. In the majority of animals, the normal vessels to the liver are under-developed and are unable to cope with the additional blood flow. A liver biopsy was taken and sent to the lab for analysis. Lola’s bladder was also checked for stones – none were found.

Patients often do very well after surgery, although some do need additional medical management. To monitor the progress of the animal’s PSS, we often ask for repeat bile acid levels to be measured before and after feeding at one and three months post-operatively.

We are pleased to report that the first set of Lola’s bloods one month after surgery are great, meaning the surgery has been successful. These will be repeated again in 3-4 months and if they are still within normal levels we can sign Lola off.

Watch our video to find out more about Lola’s treatment:

Find out more about our Veterinary Internal Medicine specialists:

Click here to discover more about the conditions we treat and the expertise of our team.