This is her story… 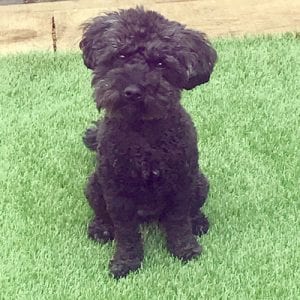 Dolly was diagnosed with diabetes in February 2019 and she had been started on appropriate insulin treatment by her local vets. However, standard doses of insulin were not controlling her blood glucose; some days her blood glucose was very high and other days it was very low.

She was initially presented to Katherine Clarke from the Internal Medicine team in April 2019 for further investigation into unstable diabetes mellitus (sugar diabetes) and gastrointestinal signs. When she initially came to Davies, Dolly was very unwell with vomiting, diarrhoea and a poor appetite. She had significant weight loss and was very sad in herself.

Dolly underwent extensive investigations including blood tests, urine tests and ultrasound scans, which identified a condition called diabetic ketoacidosis. This is a life threatening complication of diabetes mellitus, where the cells in the body are starved of glucose. This leads to massive fat breakdown and production of ketone bodies to provide an energy source to the body’s cells. Ketones are acidic and their presence in the blood causes the blood to develop an acid pH. Cell function is seriously affected by this and it ultimately can lead to the death of a patient.

Dolly was treated with an insulin drip, fluid therapy, and supportive care for her vomiting and diarrhoea. She eventually started eating again and her gastrointestinal signs subsided. She was discharged after a few days of hospitalisation with ongoing management of diabetes. We placed a special glucose sensor on her neck called a ‘Freestyle Libre’, which allows continuous monitoring of her glucose levels over a 14-day period. She tolerated this like a superstar! 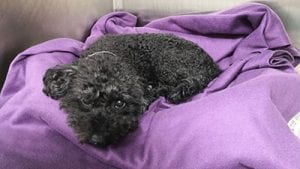 Since her initial visit, Dolly has visited Davies multiple times for routine monitoring. She also had another episode of diabetic ketoacidosis, and one less serious episode of diabetic ketosis. She has also been diagnosed with chronic pancreatitis (inflammation of the pancreas) which contributes to the instability in her diabetes.

Despite her frequent visits to Davies, regular blood tests and need for hospitalisation, Dolly has always remained very good natured. This is probably because she spends a large portion of her visits being cuddled by our lovely kennel assistants and nurses who nominated her to be our patient of the month! Dolly even has her own Instagram account, you can follow her at: @the_adventures_of_dolly_dog.