Scooby recovers well after surgery for a slipped disc 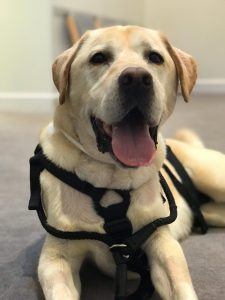 Scooby was seen by Victoria Argent from our Veterinary Neurology team for further investigation of a sub-acute onset, progressive, non-ambulatory tetraparesis – he had suddenly become unable to use any of his legs. A subtle weakness and in-coordination was noticed a couple of weeks prior, but this progressed more rapidly following surgery to remove a broken claw. Scooby was not obviously in pain except for acting more restless. In the 36 hours preceding the consultation, he became non-ambulatory.

Scooby had some blood tests followed by an MRI scan. The scan revealed a C5 – C6 intervertebral disc extrusion or slipped disc. Scooby required a ventral slot spinal surgery and this was performed at the level of C5 – C6 to remove the calcified disc material from around the spinal cord. 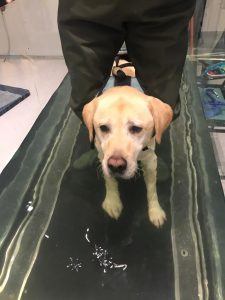 There were no complications during surgery, but due to severe bruising from the slipped disc Scooby required over a month of intensive physiotherapy and hydrotherapy. He made a slow but steady improvement during this time, and on discharge was able to walk with assistance.

The dedication and commitment of his owners and the Davies team helped Scooby to become ambulatory and he continues improving.

He was nominated as January’s patient of the month by all the nursing team because he was such a superstar to nurse, always had a waggy tail and never made a fuss during his treatment.

“Watching him improve over the weeks he was with us made looking after him even more special and worthwhile!” 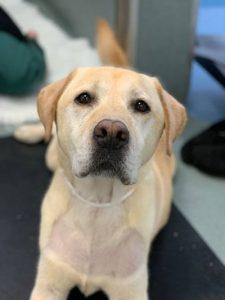 Find out more about our Veterinary Neurology and Physiotherapy services:

Click here for more information on our therapy and fitness centre and the services they offer.

Click here for more information about our Neurology service.

Watch our video of Scooby’s time at Davies…